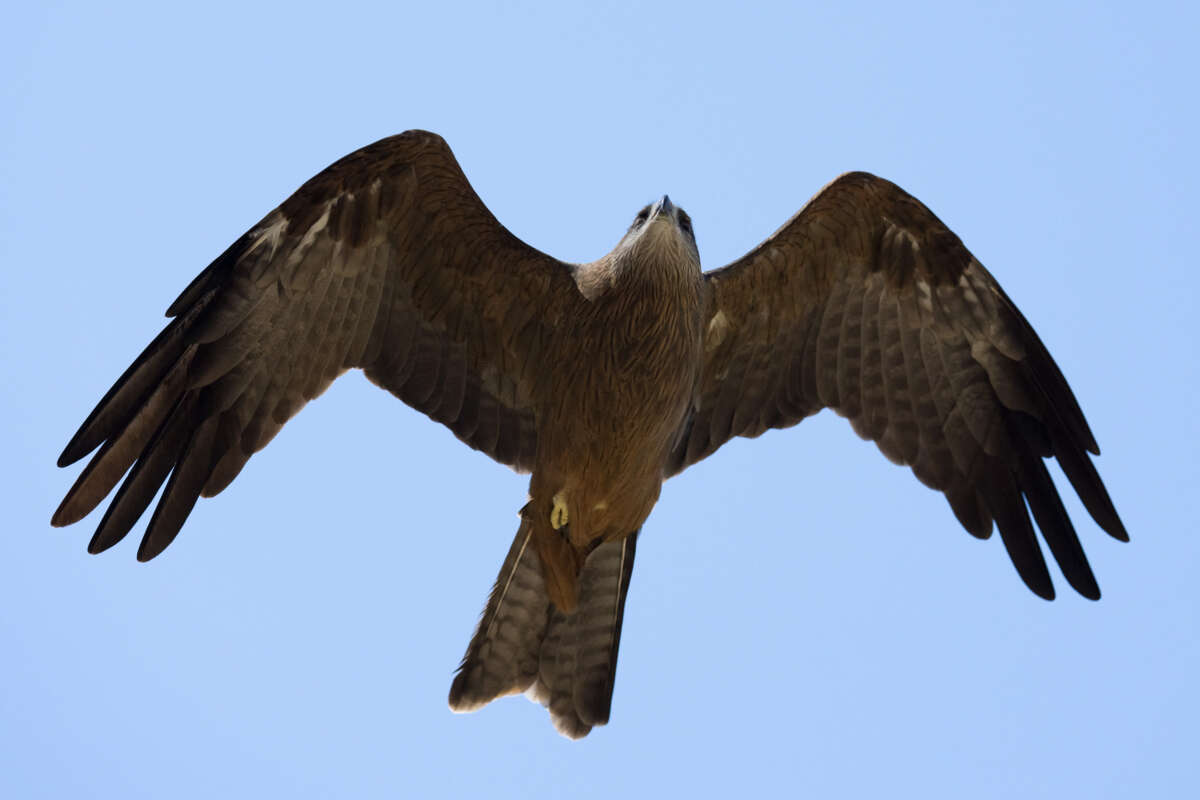 This article shows a series of images shot in a single burst, using the Sony A1 camera with a Sony 135mm f/1.8 lens. I have included every frame from the sequence so you can see that how accurately it focussed on a bird flying almost directly at the camera, getting closer in each frame.

This is the first article in what will be a Real Life Review of the Sony A1, but one with a bit of a twist…

I was using a Canon 5Ds (50Mpixel, AA filter) body, and I went into a good camera store to buy a compact, lightweight, probably mirrorless, Canon body to use my Canon lenses. I tried the M50, I think, and did not like it. The owner made a few suggestions, including an APS-C Sony, but I didn’t like it. I was too accustomed to higher-end full-featured full-frame bodies. I tried a Sony A7R II (a good friend of mine had an A7R). The A7R II was comparatively light, it felt good in my hands, and it was almost completely not what I’d come in for (it was definitely a lot more expensive than I’d intended). But I liked it. I bought the body and one lens, the Sony Zeiss 55mm f/1.8.

I bought a few more lenses, and I was using the Sony when out and about, but the 5Ds was still my main camera. When the A7R III was announced, it didn’t seem like a big deal – same sensor, but some nice-to-have new features. The noise about the A7R III got louder, and I took a closer look. I bought the A7R III and some more Sony lenses, including a couple of the then-new GM lenses. The 135mm GM came out, and I got a good deal on one. 135mm has always been a favourite focal length of mine. I began to use the A7R III, especially with the 135mm GM, quite a bit.

Sony announced the A7R IV, and I ordered one. I like having a lot of pixels, and this new body offered 60Mpixels (and no AA filter), even more than the 5Ds. After the usual interminable wait, I got it, and my 5Ds started to collect dust. The A7R IV was a lot of fun to use. You may have noticed that I learned to use manual focus properly by combining it with the Voigtländer 50mm f/2 APO Lanthar lens. I could crop images from this body heavily, and I liked that.

There was one area where I found the A7R IV lacking, however. As the Covid19 isolation built up, I’d developed an interest in photographing birds in flight. I could occasionally capture an image with the A7R IV, but not reliably. I bought an A9 II as a possible solution. I liked the extra dials on the top left shoulder, and I liked its autofocus, and some of the speed, but I had been spoiled by the pixel count of the A7R IV, and I really couldn’t crop the images from the A9 II enough.

Then in January 2021, Sony surprised a lot of us by announcing the A1. There hadn’t been the usual rumours floating around beforehand. I started reading the announcement with mild curiosity, but as I read, I realised that Sony’s cameras clearly must have a pipeline back to home base, reporting on our most deeply-held wishes – how else could Sony have designed this new camera? They’d taken the stacked sensor of the A9, grafted in double the resolution to approach the A7R IV, then powered it up to a new level. They’d made it faster shooting and faster focusing, with a much faster CPU (well, two of them!). They’d given it an even higher resolution viewfinder (I already thought the A7R IV’s viewfinder was special). They’d kept the ability to use my existing memory cards, but added the ability to use faster ones. Oh, and they’d even included the lossless compressed RAW files I’d been asking for since I got my first Sony…

I pre-ordered the A1 the same day. I’ll tell you more in my next post about the A1.

Healesville Sanctuary runs a show called Spirits of the Sky twice a day most days (except during heavy rain). In this show we get to see a variety of birds native to Australia, flying in the open. The show often opens with a beautiful black kite, an Australian raptor (a bird who catches prey in its claws).

I’m going to show you a sequence of images twice. The first time I will show you the frames that I captured, so you can see how small the bird was in the first shot, and how well the camera tracked it. All of these images have been scaled down so they will load fairly quickly, but they have not been cropped. 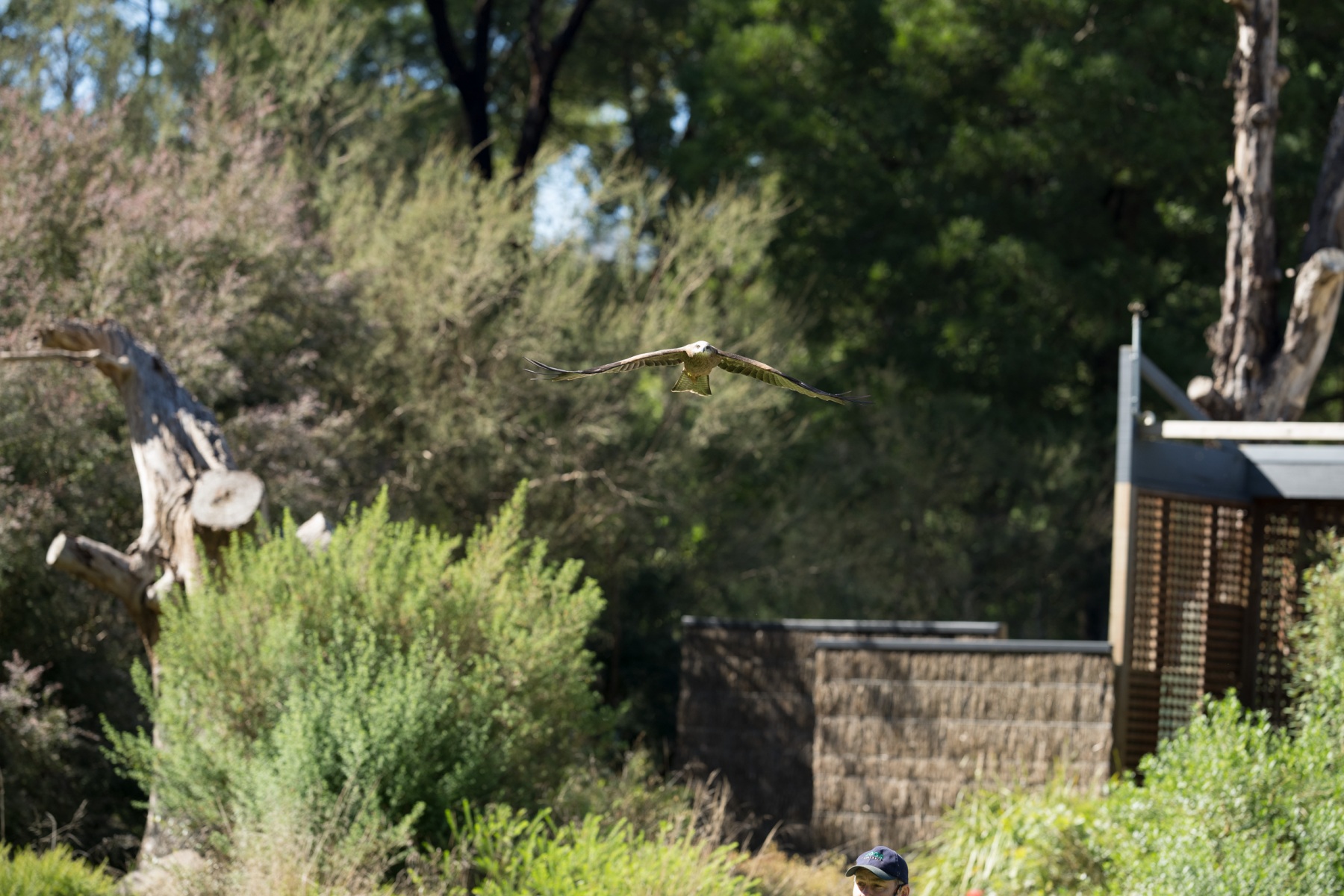 These images were shot at f/2.8 at ISO 500 with shutter speeds between 1/1250 and 1/12800 using the Sony A1 and the Sony 135mm f/1.8 GM lens. One of the many nice features of using the electronic shutter on the A1 is the ability to reach a shutter speed of 1/32000 (the A9 series can do this, too). Another really nice feature is shooting in complete silence (you can turn on a pretend shutter noise, but I prefer not to).

Now let’s look at the black kite a bit closer – these crops were taken from the images you have seen above. Click on the gallery to see the images larger and in more detail. 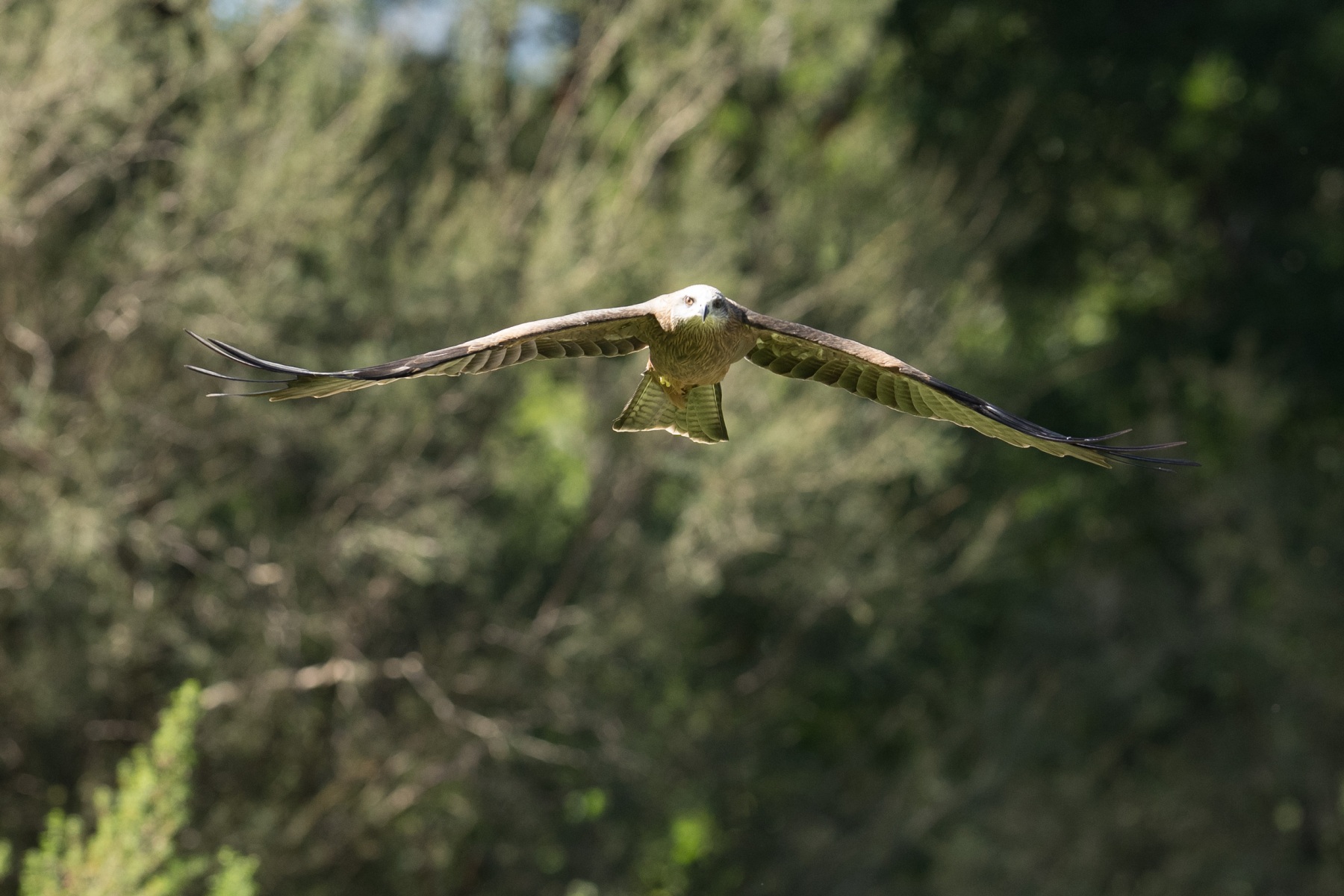 As you can see, the A1 is well able to track this bird as it flies toward me. I was using Hi speed mode, capturing uncompressed RAW images (around 100MB each) at around 20 frames per second, so this burst of 33 images represents less than 2 seconds of flight. In fact, the first 20 images have the same time stamp, down to the second, and the next 13 images are time stamped the following second. That sounds like 20 frames/second to me! It is also 2GB/s of images captured; fortunately, the buffer in the A1 is large, and can hold 82 uncompressed RAW images before slowing down. Buffer clearing time is short, and you can change settings even while it’s clearing.

If you wonder why the last few shots are so dark, it’s because the bird was flying almost directly overhead and I’m photographing its shadowed underside – I chose not to lift the shadows in processing those images, so you are seeing what I saw. You can also see a variety of particles in the air – it’s autumn in Australia, so there are lots of pieces of dead leaves in the air (they are not spots on my sensor – I checked!).

I was curious to see how much detail those last few frames captured, so here’s what happens if I take that last shot and push it 2.5 stops in RAW processing, then crop it. Click on it to see the detail. You can see that the focus is definitely on the kite’s head, and its eyes are sharp and clear. 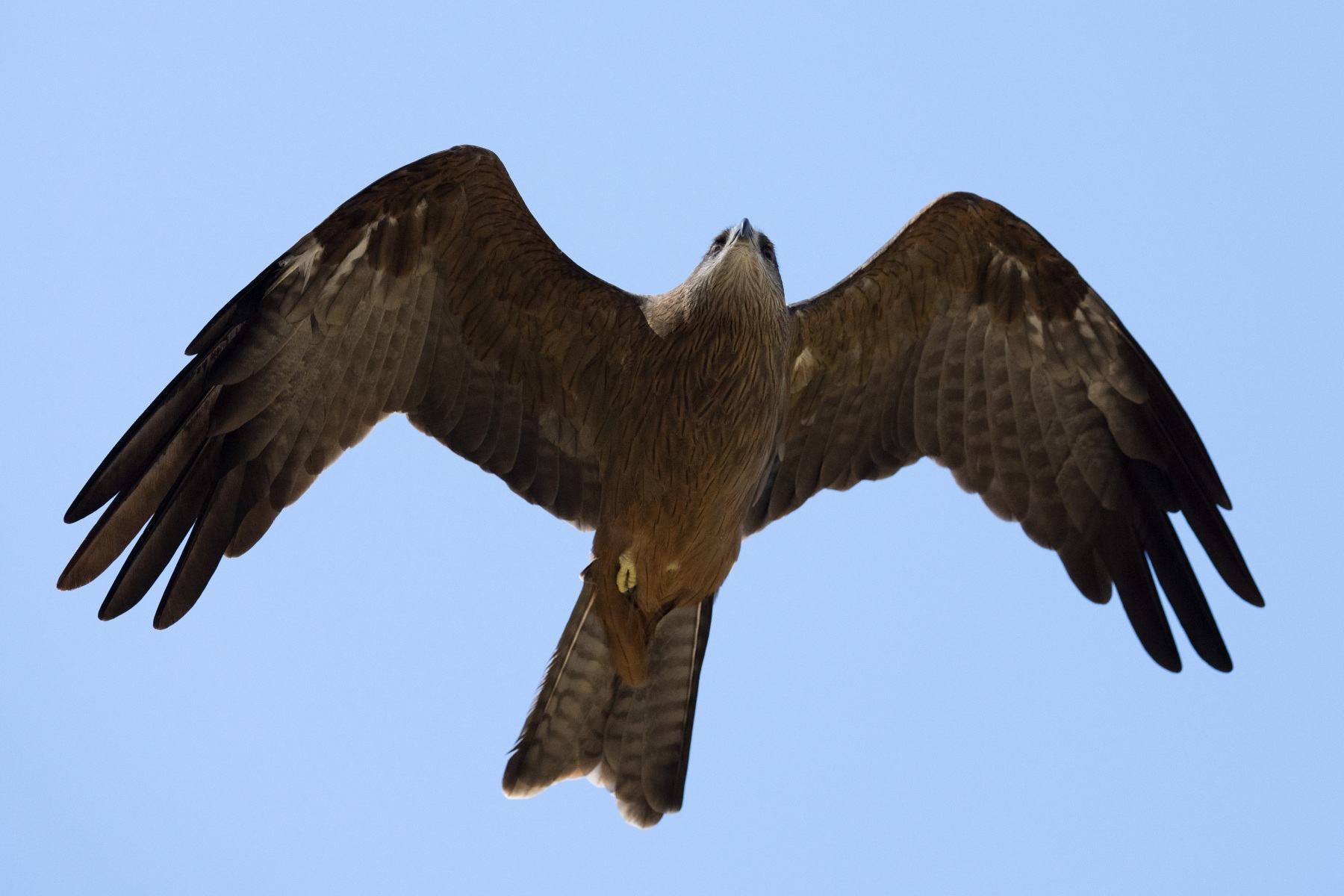 One of my strong motivations for getting the A1 was to improve my ability to photograph birds in flight.

Part of the art of photographing birds in flight is getting the bird to fill enough of the frame (especially on a camera with lower resolution, like an A9, or a 1DX, or a D5), but that is hard. I don’t have the speed of the young (reacting to the movement of the bird with twitch reflexes), nor the wiles of the long-time bird photographer (knowing where to point the camera). This camera lets me compensate. It can track a bird as long as I keep it somewhere in the frame (having it fly over my head is challenging, though), and even though I frame the images more loosely I can crop the results to get a satisfying result. And it can produce good detail even when I’ve underexposed the image. I still have plenty of learning to do, but the A1 is not going to hold me back.