Mention Japan, and a lot of people will associate it with Shinkansen (bullet trains). Trains of various kinds are a major mode of transport both within and across cities.

Trains were introduced comparatively recently in Japan, during the period following the Meiji Restoration, when Japan reopened its borders after 250 years of self-imposed isolation and embarked on a modernisation programme. Thomas Glover (whose name is now associated with the Glover Garden in Nagasaki) imported a steam locomotive engine (“Iron Duke”) and demonstrated it in Nagasaki.

The first rail line opened between Shimbashi (“New Bridge”) in Tokyo to Yokohama in 1872. The network expanded rapidly via a number of rail companies and by 1895 rail became a mode for inter-city transport with the first streetcar in Kyoto, built and operated by the Kyoto Electric Railway.

Because rail was critical to the movement of troops, Japan nationalised the rail system in the early 20th century but allowed private operators to construct light rail lines. The first subway in Asia, the Tokyo Metro Ginza line, opened in 1927. Strategic bombings by the United States destroyed much of the rail network, and after the end of World War II, the Japan National Railways (JNR) was established. In 1987 JNR was privatised and split into seven railway companies collectively called the Japan Railways (JR) group.

Japan was the first country to build dedicated railway lines for high-speed travel. The Shinkansen (新幹線) (in Japanese ‘new trunk line’ or ‘new main line’) was established as a high speed rail network, but this word has since been adopted to refer to the trains themselves. The Tōkaidō Shinkansen (東海道新幹線) began service on 1 October 1964, in time for the first Tokyo Olympics. The Shinkansen has become the symbol of modern Japan – fast, efficient, on-time, innovative.

Over the Shinkansen’s 50-plus-year history, carrying over 10 billion passengers, there has been not a single passenger fatality or injury on board due to train accidents. There has been multiple generations of the trains. The initial series (Series 0) launched in 1964 operated up to a maximum speed of 220 km/h. They were discontinued in December 2008 (so they were still operational when we first visited Japan!). Most tourists on a Japan Rail Pass are limited to using the 300 or 500 series trains. The advanced N700 series (latest iteration is the N700S) can operate up to 300 km/h and are normally more expensive to book.

Our first experience of a Japanese train was boarding the Narita Express in 2008, which took us from Narita Airport to Shinjuku Station. It was a typical intercity train, and wasn’t particularly fast or flashy looking.

Within Tokyo, we often used the JR Yamanote line, as holders of the Japan Rail Pass can travel on it without paying additional fees.

Over the years, we have experienced various Shinkansen trains (including the N700 which we caught once). It’s interesting to see how much sleeker the nose of the later generations are compared to Series 0.

The local trains (and trams) are quite different and can seem quite quaint and perhaps old fashioned. Here are some examples, including street cars in Okayama and Nagasaki.

The Keio line to the western suburbs of Tokyo was featured in the Studio Ghibli movie “Whisper of the Heart.”

Chris Tham2021-08-121 min read
Hamarikyu Gardens is a special garden with a tidal pond and a chequered history, located at the mouth of the Sumida River as it enters Tokyo Bay.
Read More

Chris Tham2021-08-141 min read
Nikko is a small town about 2 hours from Tokyo that is famous for the UNESCO World Heritage site consisting of a complex of shrines, temples and shogun mausoleums.
Read More

Chris Tham2021-08-161 min read
In recent years, Akihabara has become infamous not only as a place where you can buy cheap electronic goods but an epicentre for Japanese otaku culture.
Read More

Chris Tham2021-08-221 min read
Kamakura is a small town popular with tourists because of attractions such as the Hasedera temple located on a hill with great views of the town, the Great Buddha bronze statue and other temples and shrines.
Read More

Chris Tham2021-08-241 min read
We discovered the Sasuke Inari Shrine by accident while walking around in Kamakura. A set of bright red torii gates lead up a hill into a shrine full of statues of foxes and fox dwellings with families.
Read More

Chris Tham2021-08-261 min read
We captured a worker doing some maintenance on a power line in Kamakura, Japan.
Read More

Chris Tham2021-08-281 min read
This dog seems to be asking me if I have seen its owner. Captured near Kamakura station in Japan.
Read More

Chris Tham2021-08-301 min read
Nijo Castle is a “flat” castle containing Ninomaru and Honmaru Palaces. It is established in Kyoto by Tokugawa Ieyasu, the first shogun of Japan.
Read More

Chris Tham2021-09-011 min read
Kinkakuji, or Temple of the Golden Pavilion, is one of the must see places in Kyoto. Most of the temple is covered in gold leaf, and it’s set next to pond and therefore extremely photogenic.
Read More

Chris Tham2021-09-031 min read
Nara is considered a small city today, but was once the capital of Japan and the seat of the Emperor.
Read More

Chris Tham2021-09-051 min read
The Ghibli Museum is a unique museum showcasing the work of the Japanese animation studio Studio Ghibli. It is located in Inokashira Park in Mitaka.
Read More 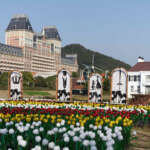 Chris Tham2021-09-131 min read
Huis Ten Bosch is a gigantic theme park in Sasebo (near Nagasaki) that is intended to be a mini version of Netherlands, including famous buildings such as the Huis Ten Bosch palace, Stadhuis and the Domtoren.
Read More

Chris Tham2021-09-151 min read
Osaka Castle was destroyed (several times over the course of history), and the present building is a concrete reconstruction.
Read More

Chris Tham2021-09-171 min read
Okayama Castle is another reconstructed castle (the original was destroyed in World War II by air raids). Nearby is Korakuen which is regarded as one of the Three Great Gardens of Japan.
Read More

Chris Tham2021-09-191 min read
Hiroshima Castle was destroyed by the atomic bomb in 1945 but has been reconstructed (in 1958) and now serves as a museum of Hiroshima history pre World War II.
Read More 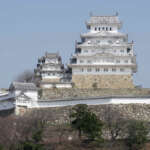 Chris Tham2021-09-211 min read
Himeji Castle is the only castle we visited in Japan is a “real” castle, ie. it is the original castle (with some restoration work) and not a reconstruction.
Read More

Chris Tham2021-09-231 min read
Kurashiki has a preserved canal area that dates back to the Edo Period, when the city served as an important rice distribution center. In fact, “Kurashiki” roughly translates to “town of storehouses” in reference to the rice storehouses.
Read More

Chris Tham2021-09-271 min read
The Genbaku Dome (aka Hiroshima Peace Memorial, or the Atomic Bomb Dome) is a former exhibition hall that somehow still stands as a ruin.
Read More

Chris Tham2021-09-291 min read
The Hiroshima Peace Park is dedicated to the legacy of Hiroshima as the first city in the world to suffer a nuclear attack.
Read More

Chris Tham2021-10-011 min read
This hotel almost seems like it could have been in a James Bond film starring Roger Moore.
Read More

Chris Tham2021-10-031 min read
Ekinishi (“west of station”) is a small neighbourhood just west of Hiroshima Station that is full of trendy bars and restaurants and really comes alive at night.
Read More

Cat in the Hat

Chris Tham2021-10-051 min read
I saw this cute cat sitting in a hat in a shop at the Ekinishi area near Hiroshima Station.
Read More 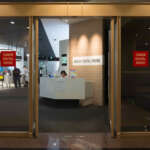 Chris Tham2021-10-091 min read
Canon has 3 camera showrooms and service centres in Japan. This is the one in Osaka, located in Umeda near Herbis Plaza in 2017.
Read More

Chris Tham2021-10-111 min read
Ginkaku-ji, or Temple of the Silver Pavilion, is officially named Jishō-ji and built for a Shogun who became a Buddhist monk.
Read More

Chris Tham2021-10-131 min read
I captured this near the remains of the Karesansui garden at Ginkaku-Ji in Kyoto, Japan.
Read More

Start of a Journey

Chris Tham2021-10-151 min read
This path is part of the remains of the Karesansui garden at Ginkaku-Ji in Kyoto, Japan.
Read More 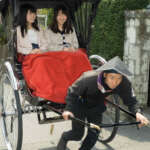 Chris Tham2021-10-171 min read
The driver of this rickshaw carrying two girls looked up at me just when I took the photo.
Read More 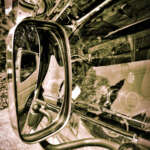 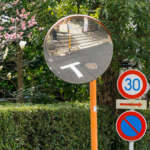 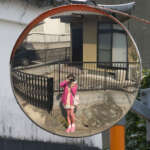