Photo of the Day

This is a collection of articles showcasing a photo for the day, usually with a short commentary about the photo and why it was chosen.

I saw these two birds perched on a motorcycle in the early morning just after dawn. This photo was taken at Tanjung Tokong Beach in Penang. Tanjung Tokong is believed to be the site of the first Chinese settlement in Penang and was a sleepy fishing village until the 1970s and now it is full of skyscrapers as it is located close to Gurney Drive. Stewart Lane (Lorong … END_OF_DOCUMENT_TOKEN_TO_BE_REPLACED

Stewart Lane (Lorong Stewart) is a narrow backroad intersecting Love Lane in Penang, Malaysia. It was named after a Stewart family that lived here. i found this at in a bicycle basket . It was intensely curious about me, so I took a photo using the Panasonic GX9 and GX 45-175mm telephoto lens and processed it using Skylum Luminar 4. I love the cat's eyes in the photo and … END_OF_DOCUMENT_TOKEN_TO_BE_REPLACED 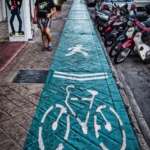 Carnarvon Street in Penang is named after Lord Carnarvon, Secretary of State for the Penang Colony in the 1876. In those days, this area was a Malay village. This photo is taken along Carnavon Street close to the intersection with Armenian Street. It shows a shared bike/pedestrian path along a woman walking alongside next to a street art that implores you to take a snap with … END_OF_DOCUMENT_TOKEN_TO_BE_REPLACED

#Queenstown #NewZealand captured in 2004 using a #

Christchurch Cathedral before the earthquake, capt

#NewZealand, land of the #LongRedCloud, captured i

#NewZealand, land of the #LongWhiteCloud, captured

@NewZealand, land of the #LongWhiteCloud, captured

#NewZealand #SouthIsland #Alps captured from the a

Introducing the next article in our 21 Years of #d

Sydney from the air, taken in 2000 on the Kodak DC

Behind the scenes at Sydney Airport, taken in 1999

Hawkesbury River from the air, taken on the Kodak