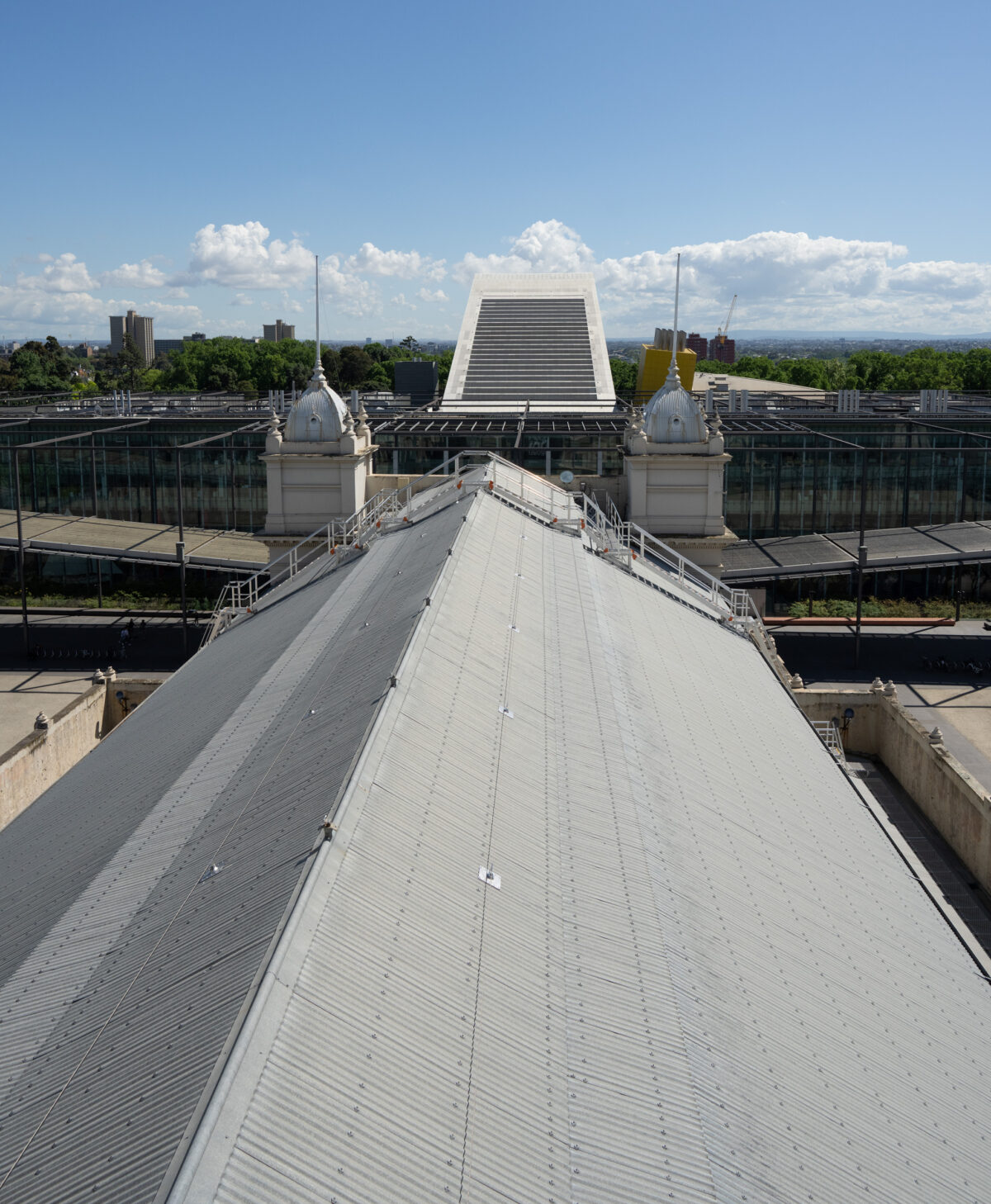 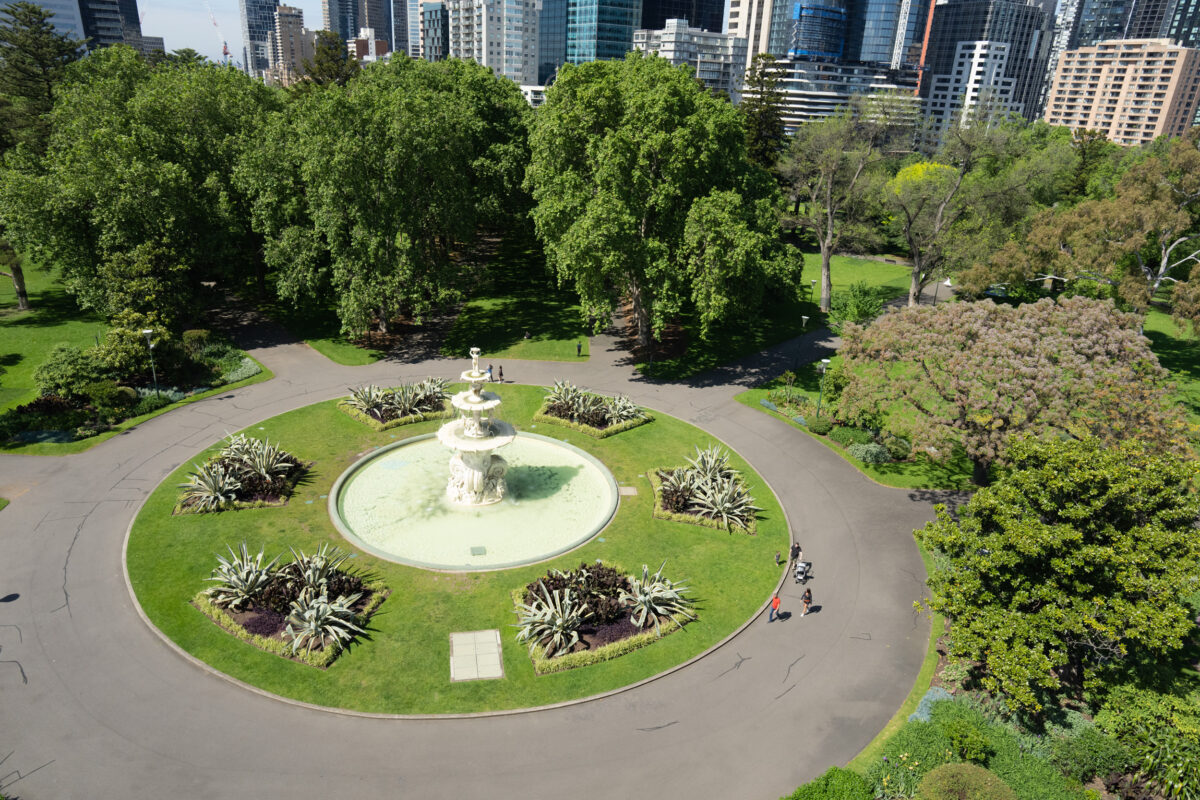 And now you get to see the view from the actual Royal Exhibition Building roof-top promenade (which has been closed for a long time).

Looking south from the the Royal Exhibition Building roof-top we can see the gardens that separate the building from the city centre. Melbourne is fortunate in having green space on most sides of the city centre, so this is far from being the only green space nearby. The head landscaper of these gardens lives on site in the cottage that was always intended for the head gardener (another building on the site still being used for its original purpose!)

This was shot on a Sony A1 with the Sony 24mm GM at f/8, 1/2000, ISO 1250 – I am a little surprised that auto-ISO chose an ISO that high, considering the brightness of the spring sunshine. This image is uncropped. You can get an idea of the scale from the size of the people walking around the circle. 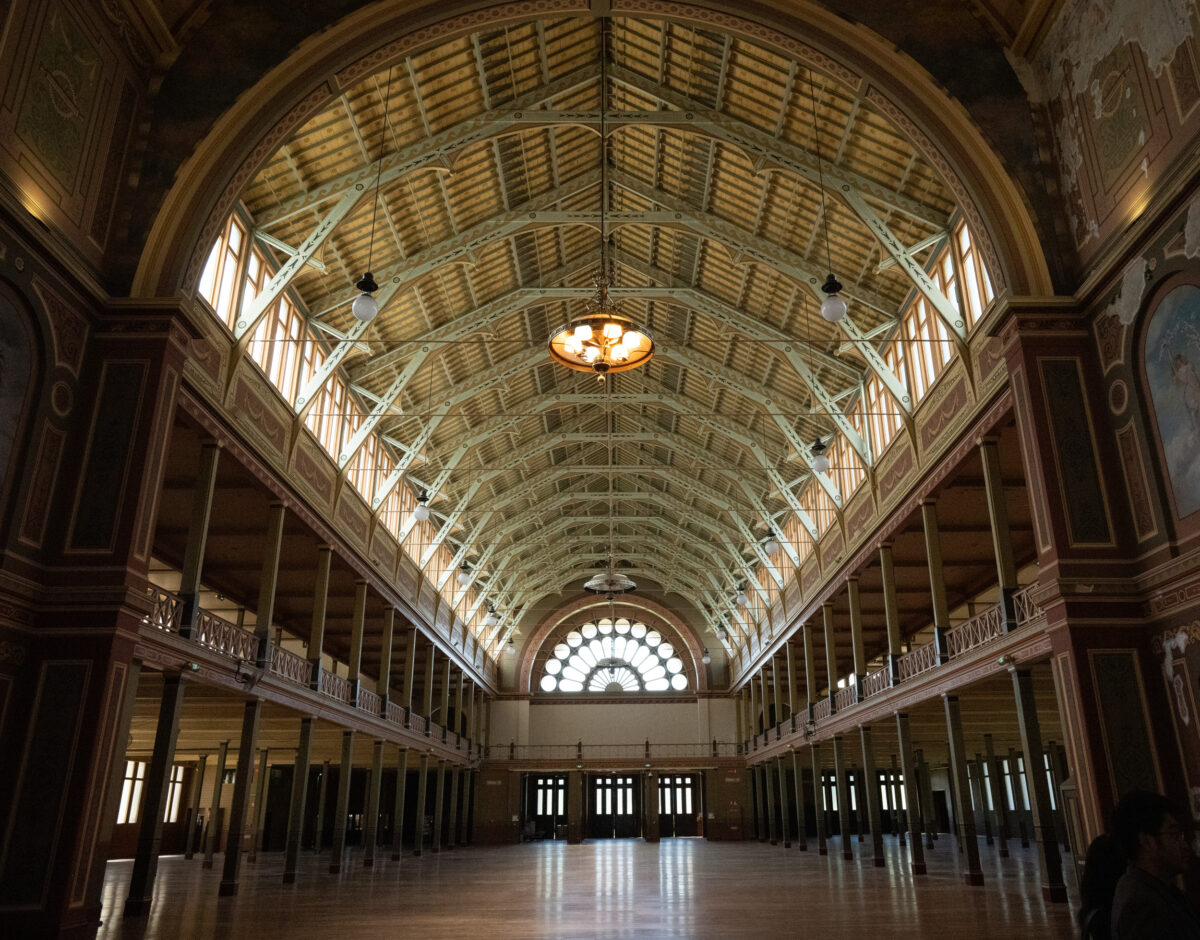 Here is a scene rarely seen (yes, I made that terrible pun).

The great hall of the Royal Exhibition Building empty – that’s a rare sight. It lets you appreciate the design of the roof structure, supporting long sheets of corrugated iron (so appropriate for an Australian building).

I’m only showing you one side of the building, because I am standing under the central dome and looking to one side; it extends as far in the other direction, too.

The restoration work is continuing (there is still damage visible on the right), but it looks quite impressive for a building which has past its 140th birthday, and has a long and varied history (some of which you will learn about if you take the new “Royal Exhibition Building Promenade Tour”, which I recommend). 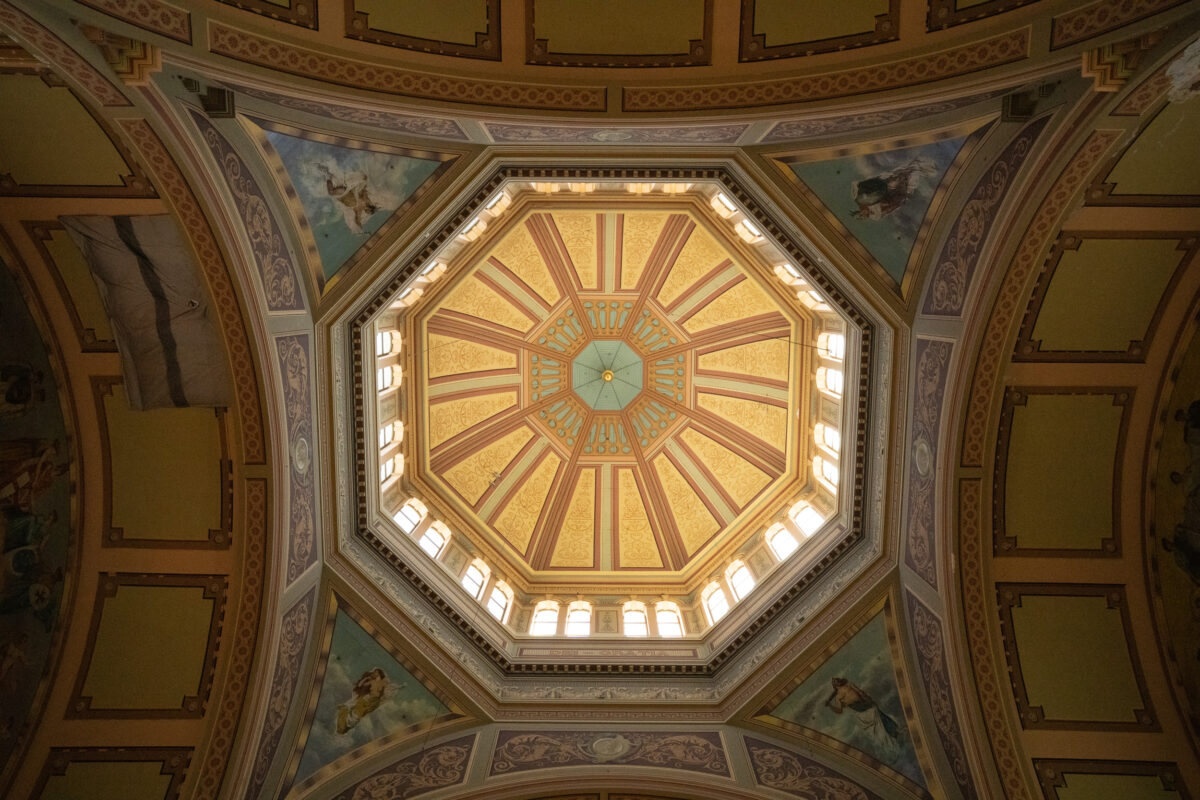 The Melbourne Museum has just opened a new experience. The Royal Exhibition Building, completed in 1880 for an international exhibition, has just finished the first stage of a major restoration, and a week ago they started taking small groups for a tour, starting at the Museum, strolling across the open space to the Exhibition Building, down to the basement, then up to the promenade on the roof of the building. The view from the roof is impressive, letting you appreciate the intricate design of the gardens around the Exhibition Building and the Museum. But the image that stood out to me was the simple one I shot inside the building – I stood directly under the centre of the big dome, leant back, and shot straight up. I felt I would fall backwards, and thought that was silly, until I saw two others do exactly the same, and react the same way.

You’ll notice a couple of places which are still covered. Some of the intricate paint was damaged by water leaks and is covered to stop paint flaking off until the restoration can reach those parts. You may not appreciate that the restoration is made more complicated because this building is still used regularly: students still sit end-of-year exams in the great hall, and for regular exhibitions like the Car Show, and… Apparently this is the last of the great 19th exhibition buildings still actively being used for the purpose for which it was constructed. 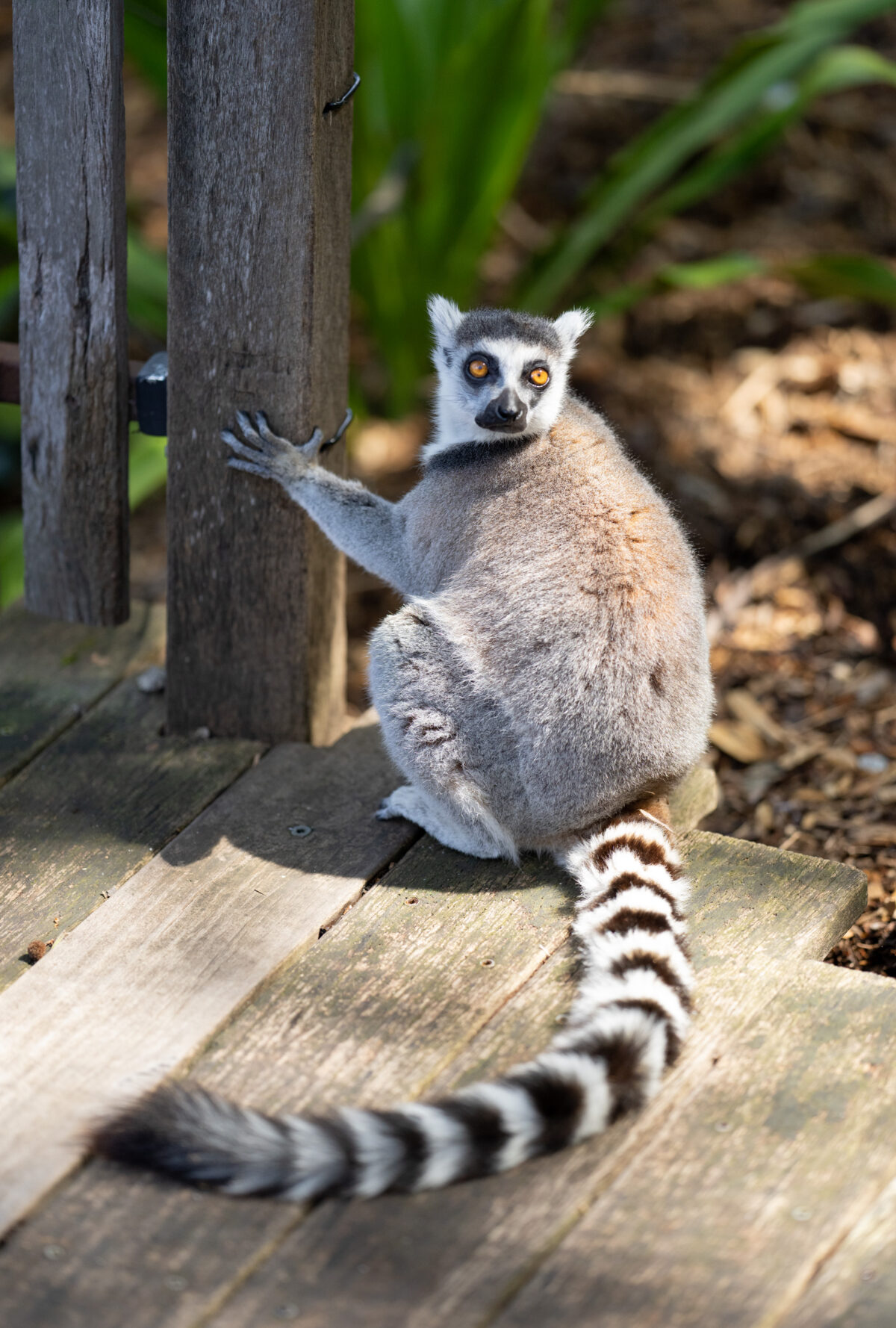 This lemur looks guilty, but denying it. 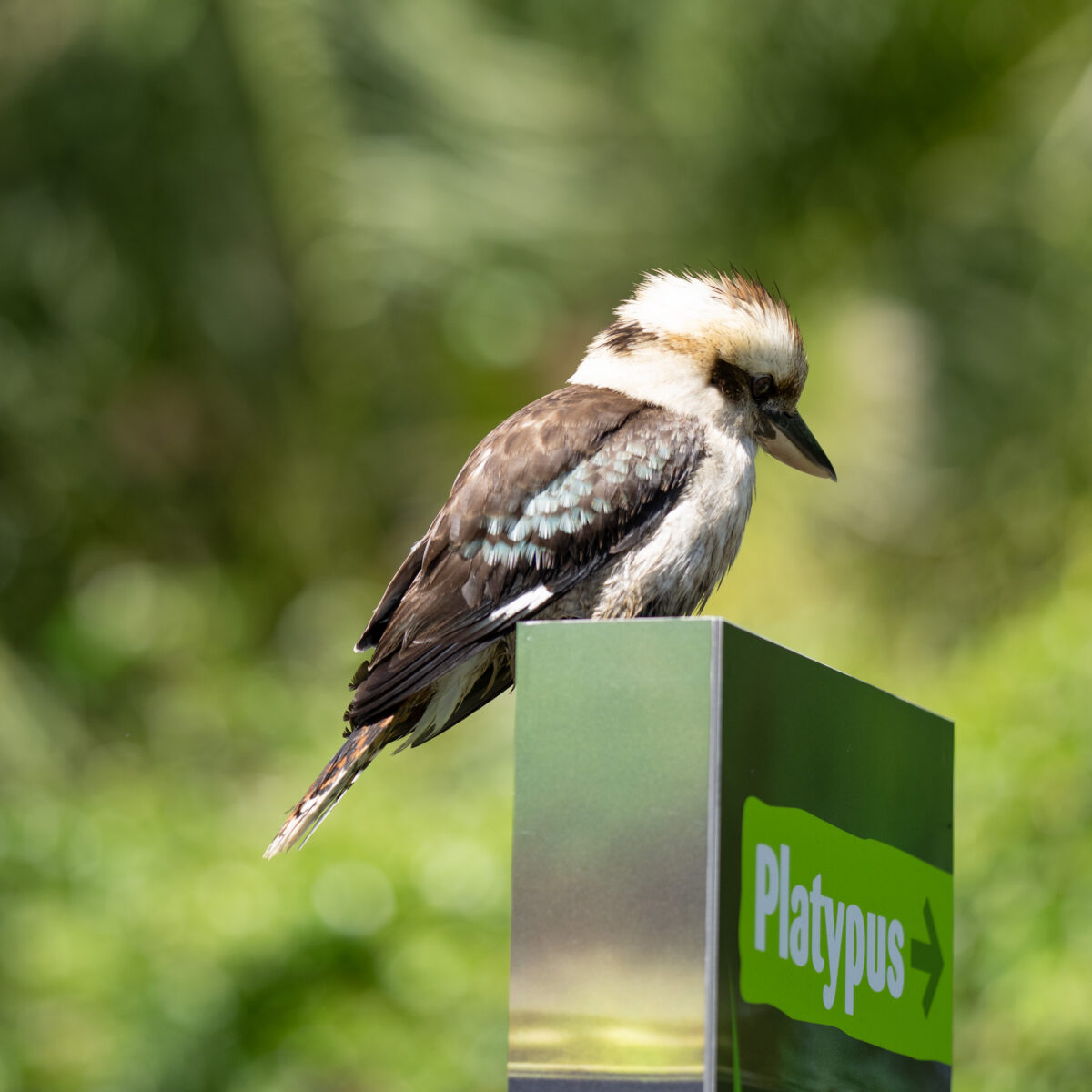 While I was wandering through the zoo I noticed a kookaburra sitting on top of a sign. This was a bird passing through, although he or she was not in a hurry to move, even though being harassed by a smaller bird (I think the smaller bird was protecting a nest, and was bothered by the presence of a kookaburra, because kookaburras are predators). 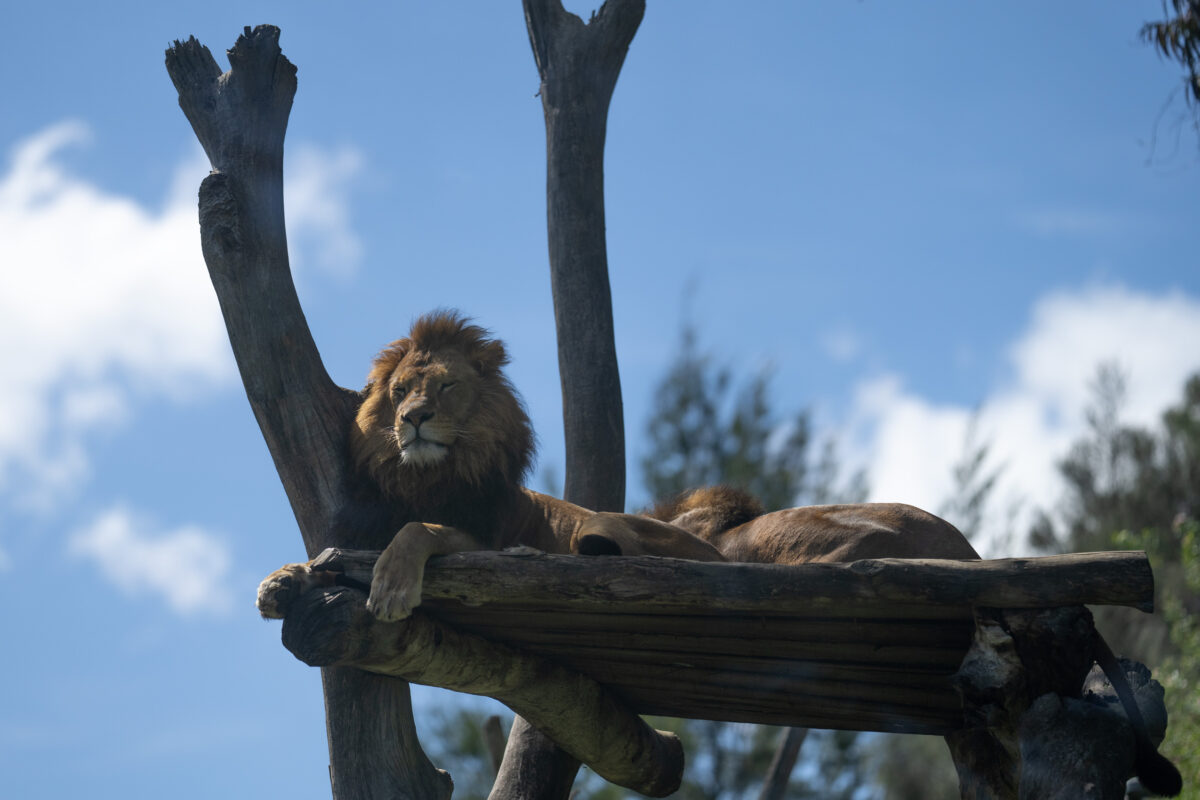 I mentioned on the shot of the tiger that it was a sunny day; here you can see blue sky and bright sun. The two bachelor lions at Melbourne Zoo are up on their high platform, several metres above the ground, enjoying the sunshine.

This was shot on a Sony A1 with the Sony 135mm GM wide open at f/1.8, 1/10000, ISO 100 – one of the advantages of using electronic shutter is the ability to reach 1/10000 to produce a better exposure with the lens wide open and ISO at 100; on a camera restricted to mechanical shutter we’d have to close down the aperture somewhat under these conditions. 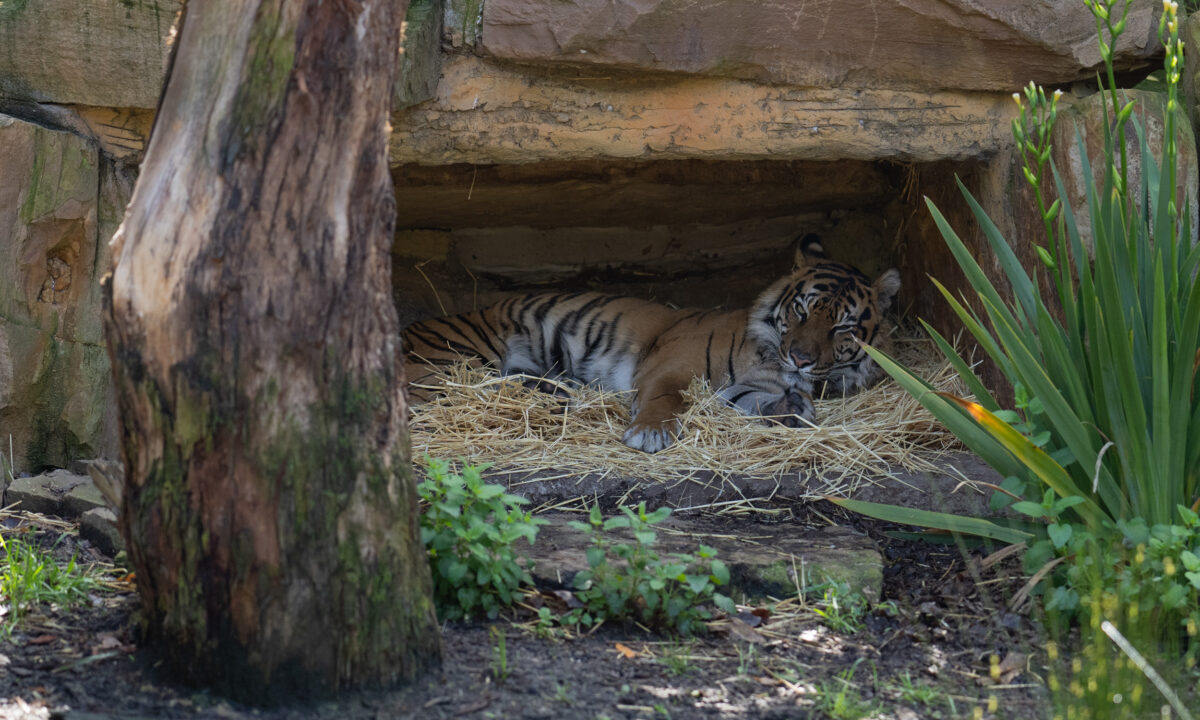 Indra the tiger is reclining on her bed of straw. The weather was surprisingly nice after a spate of heavy rain (and flooding). The forecast was for rain and heavy overcast. Instead we got a lot of blue sky and bright sun (not that you can see that here – her grotto is in shade), and it was warm enough to wear short sleeves. 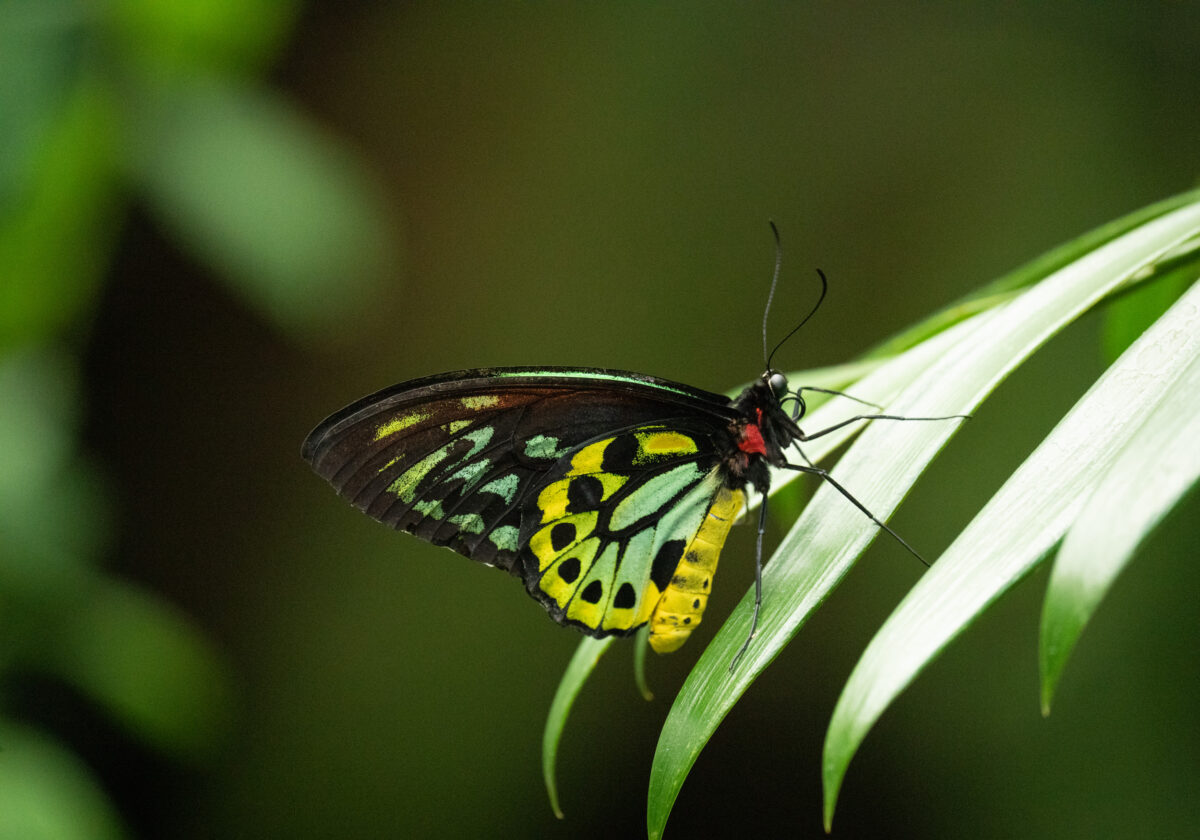 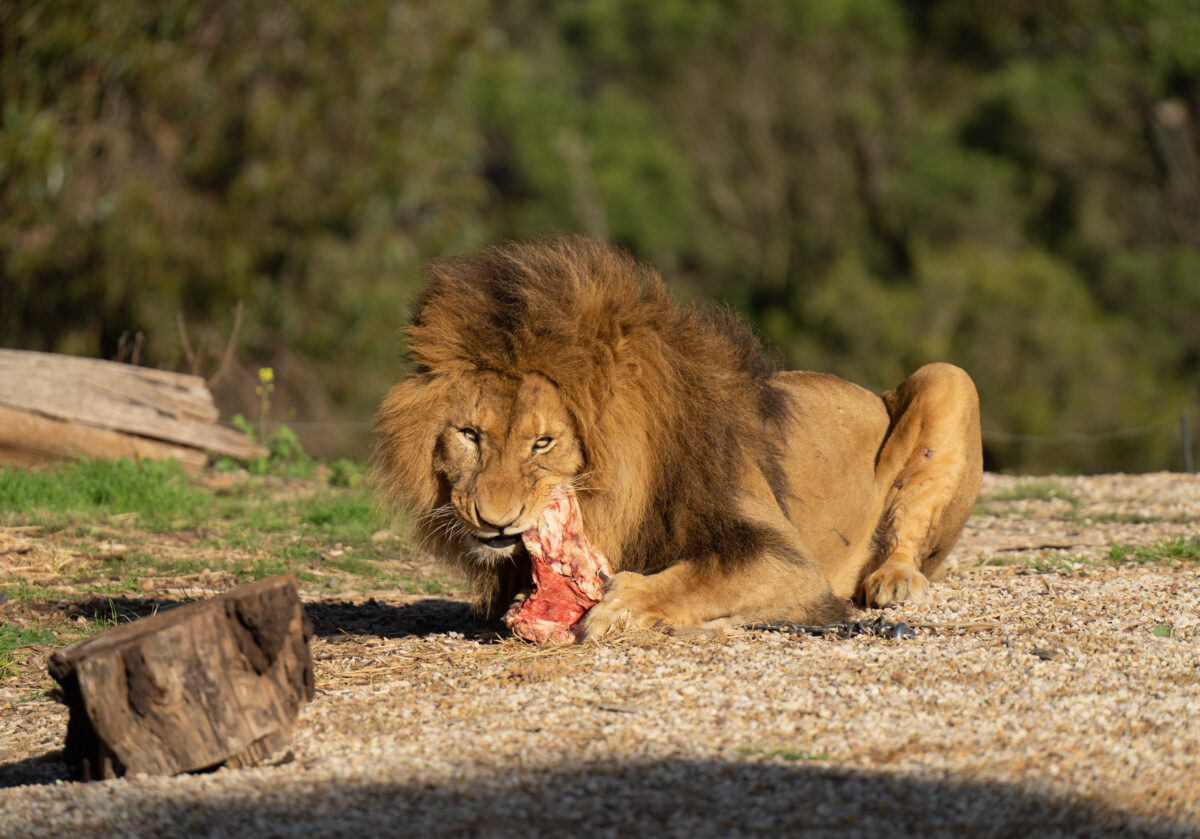 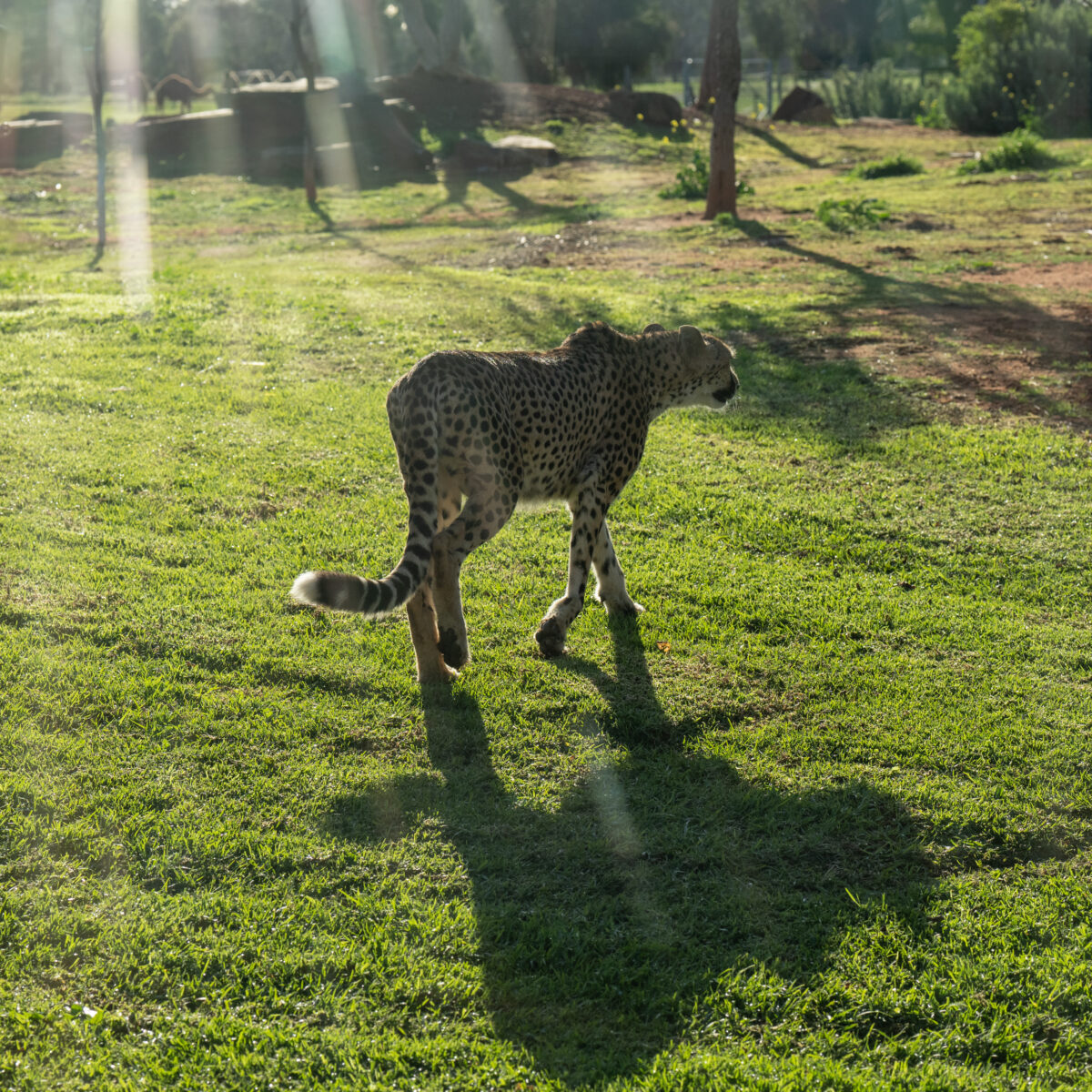 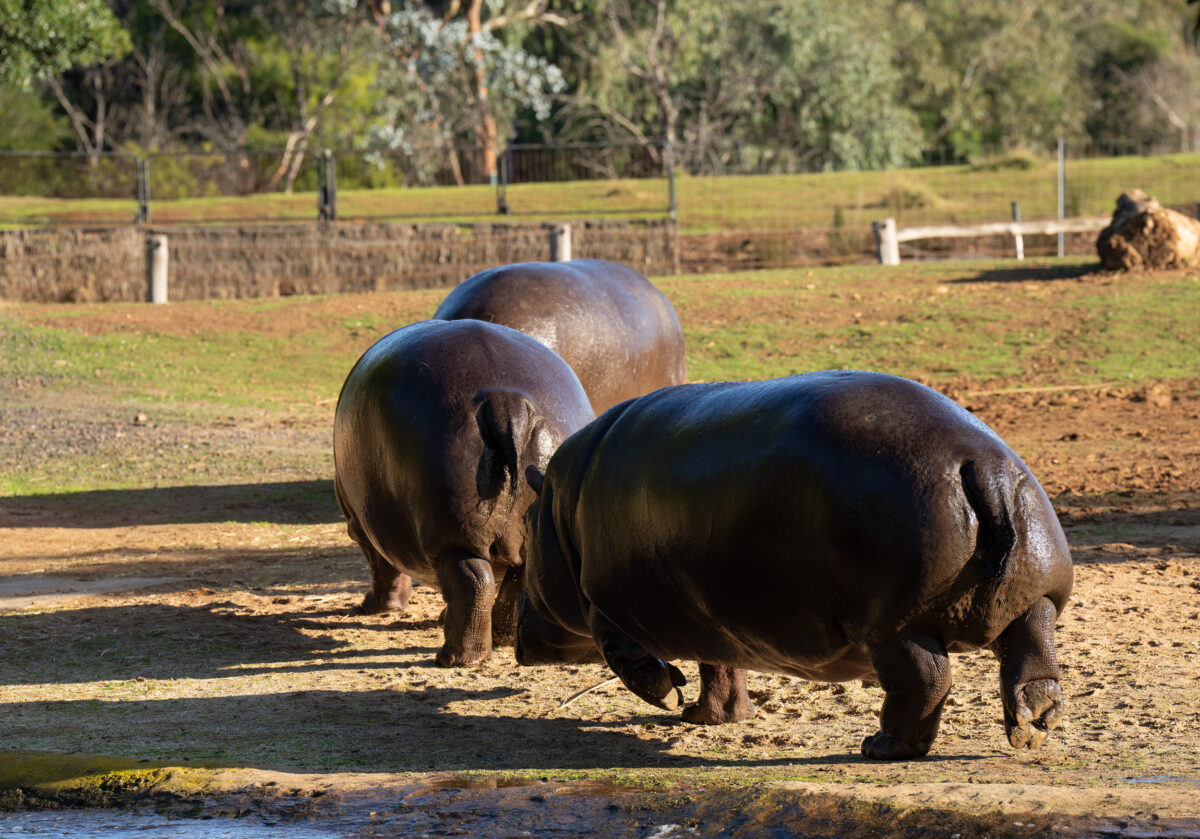 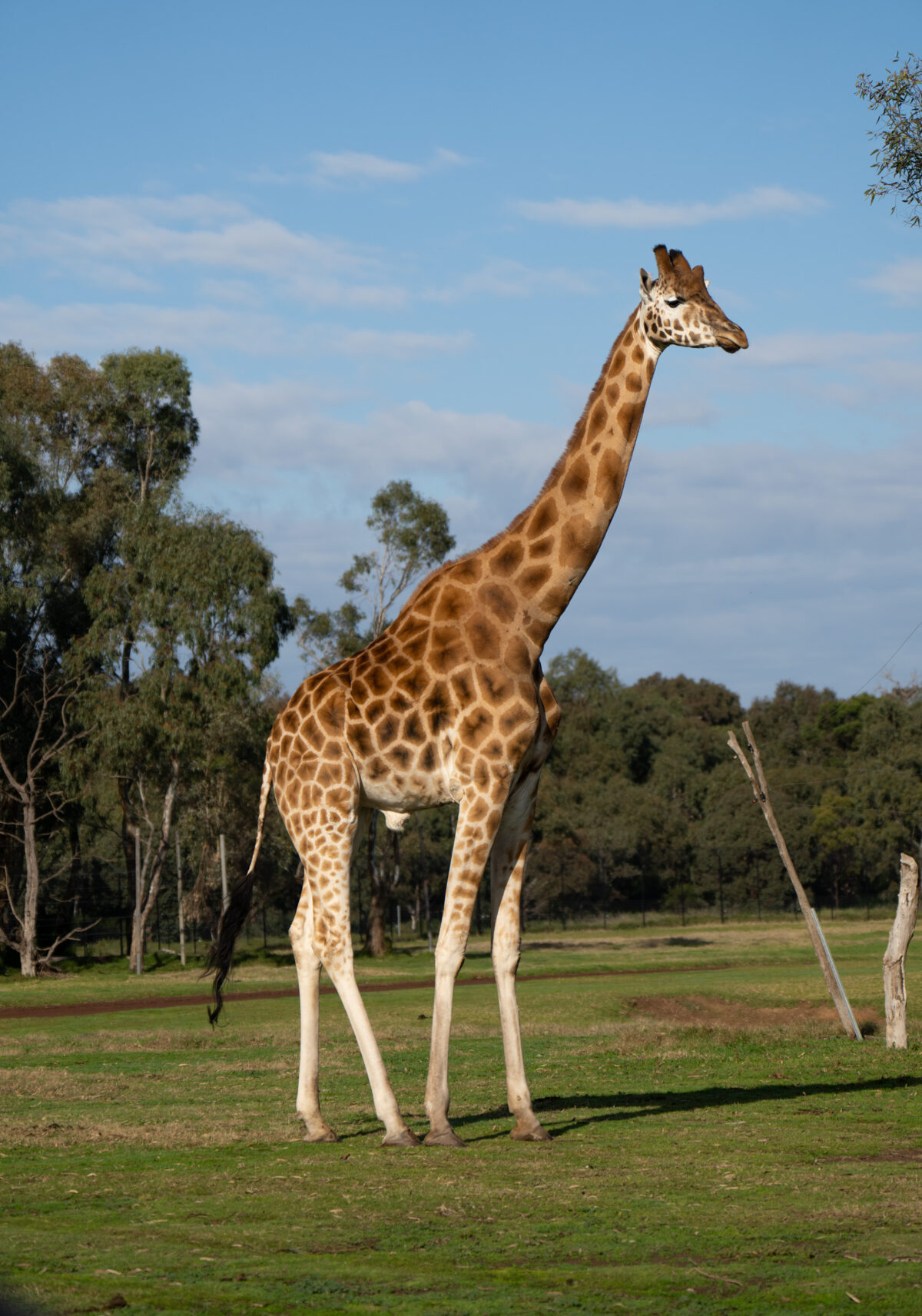 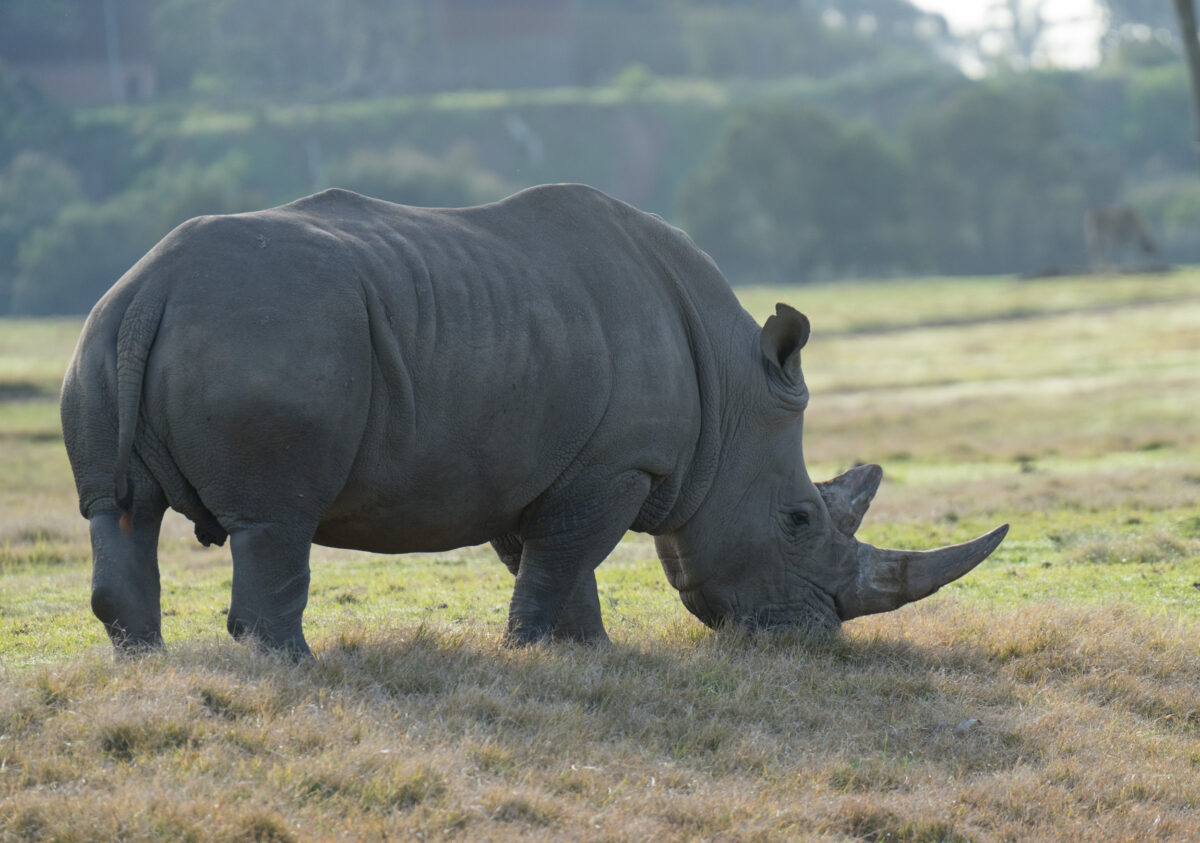 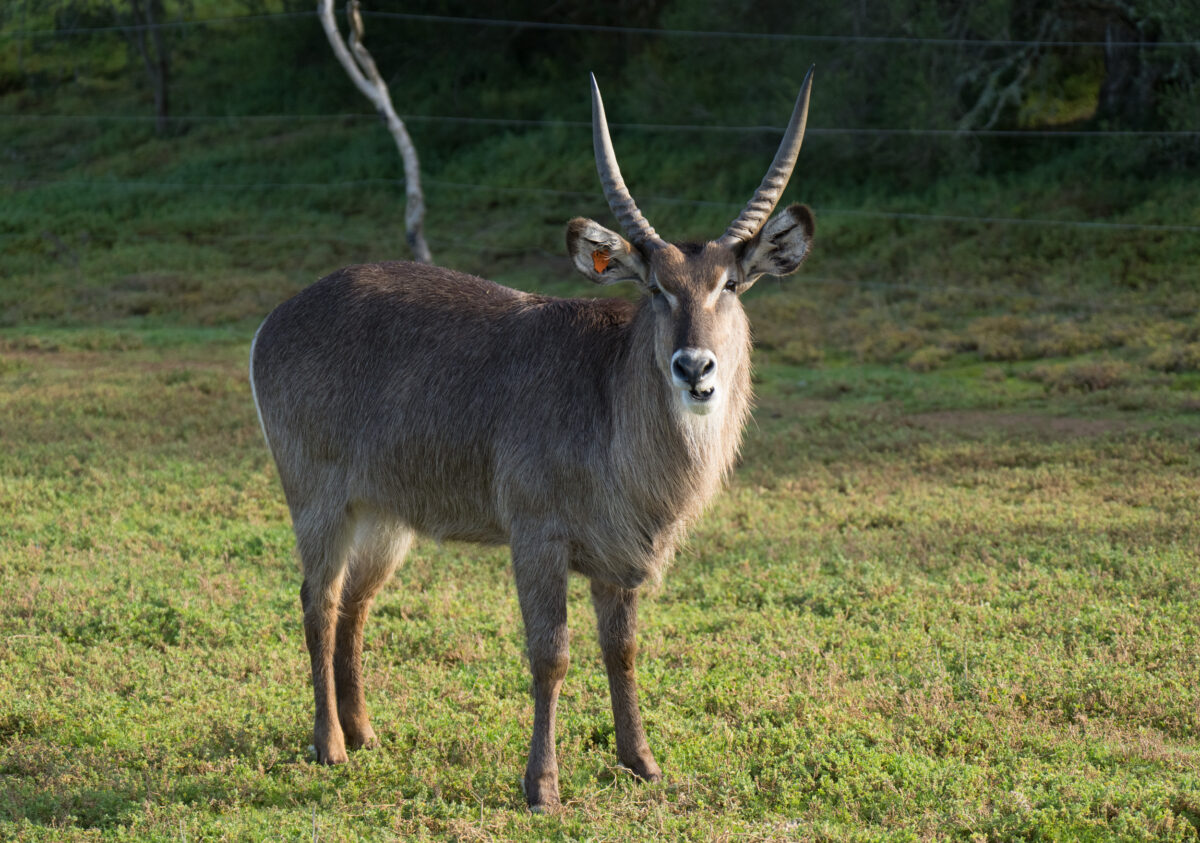 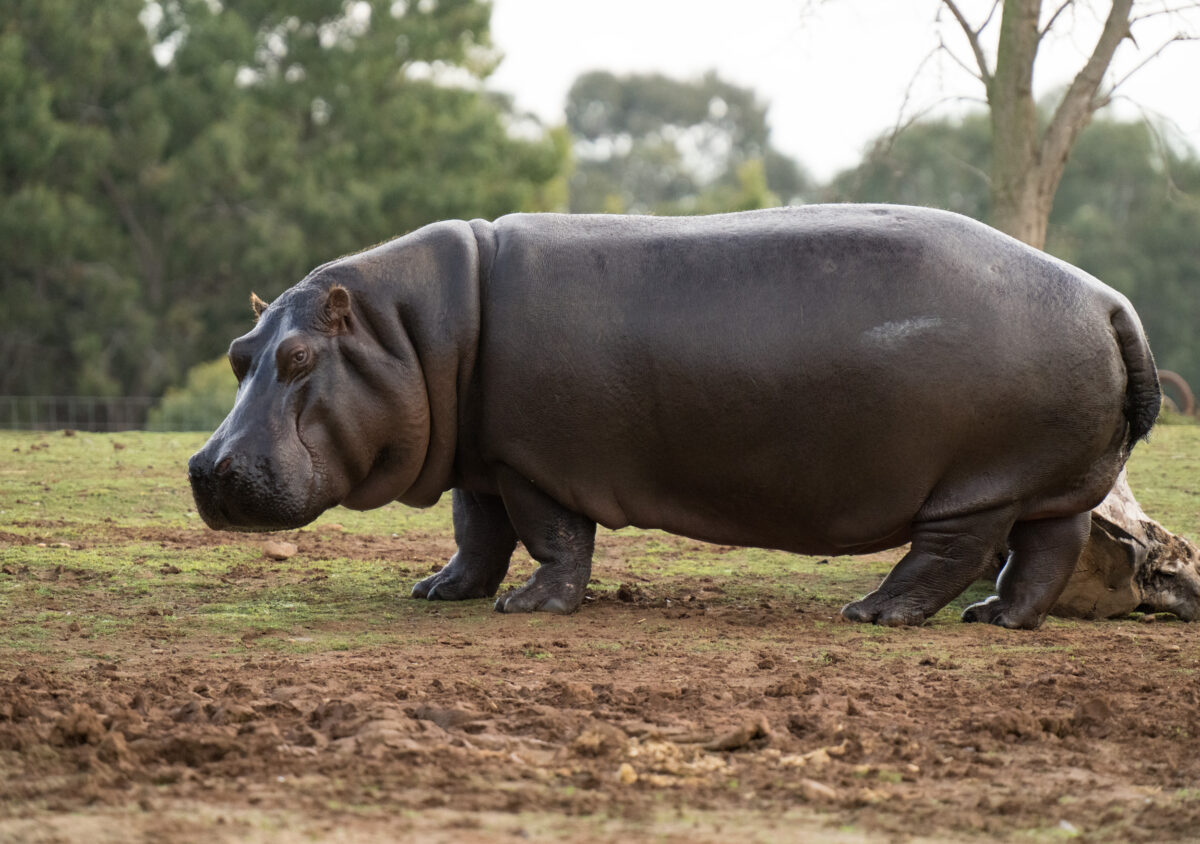 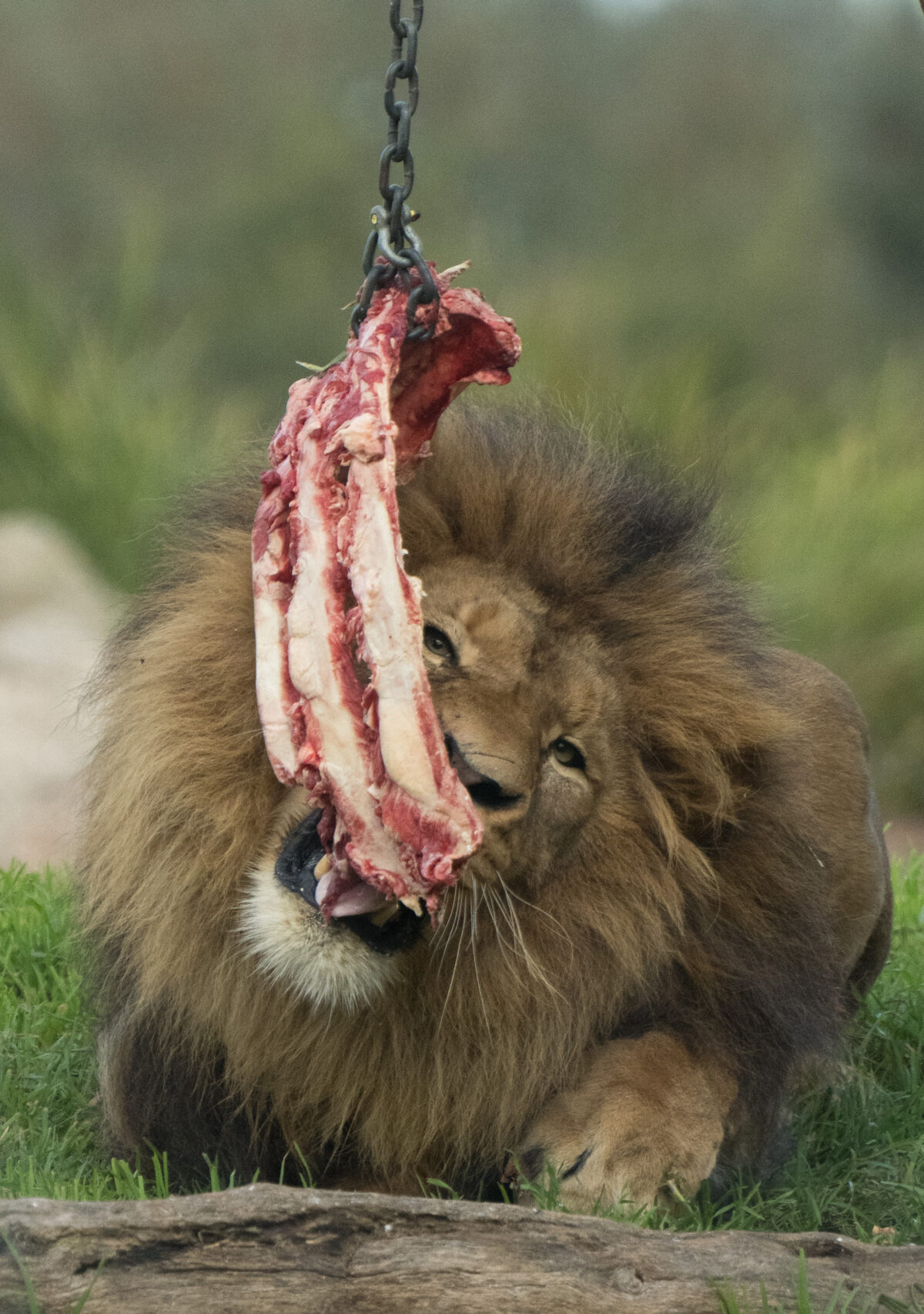 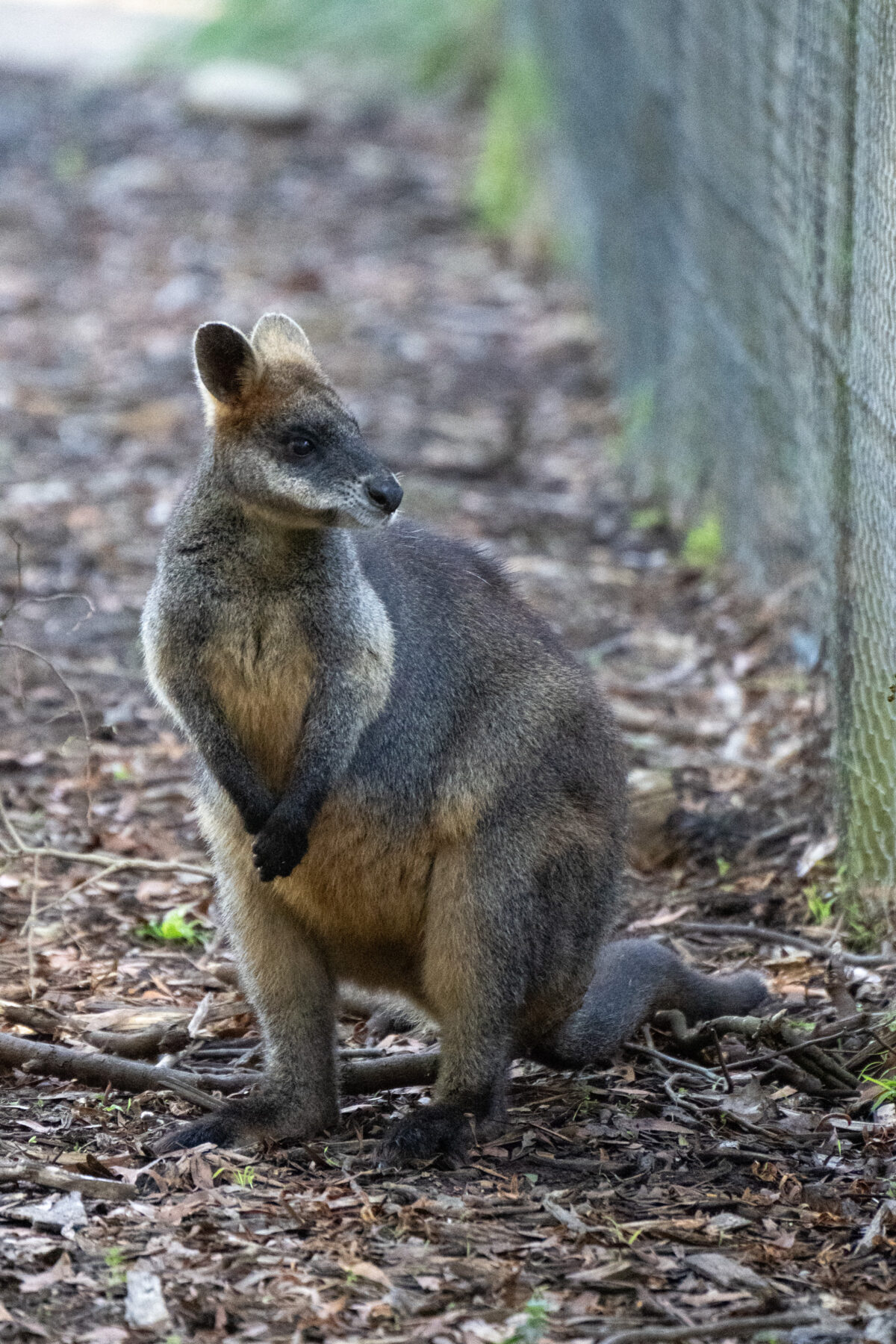 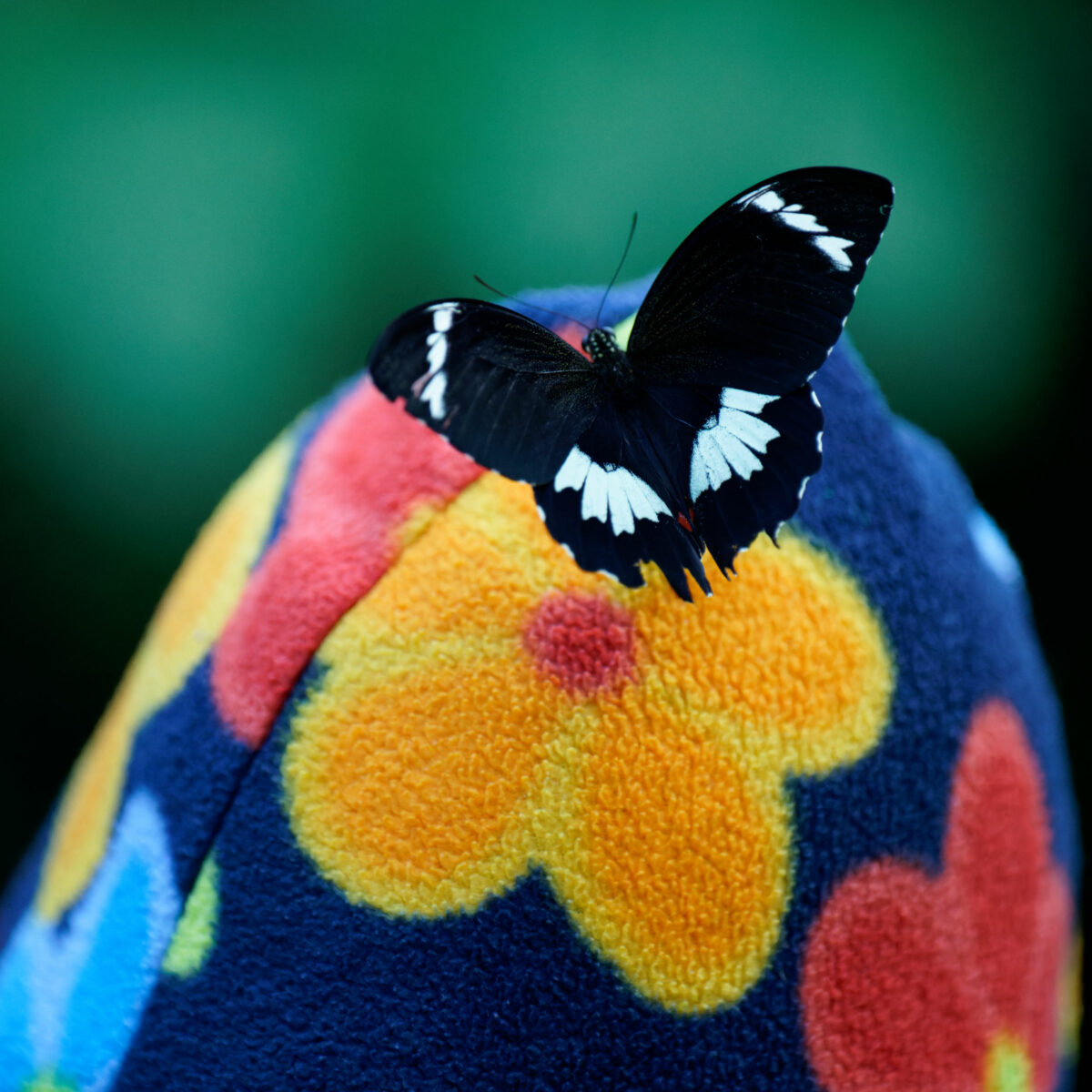 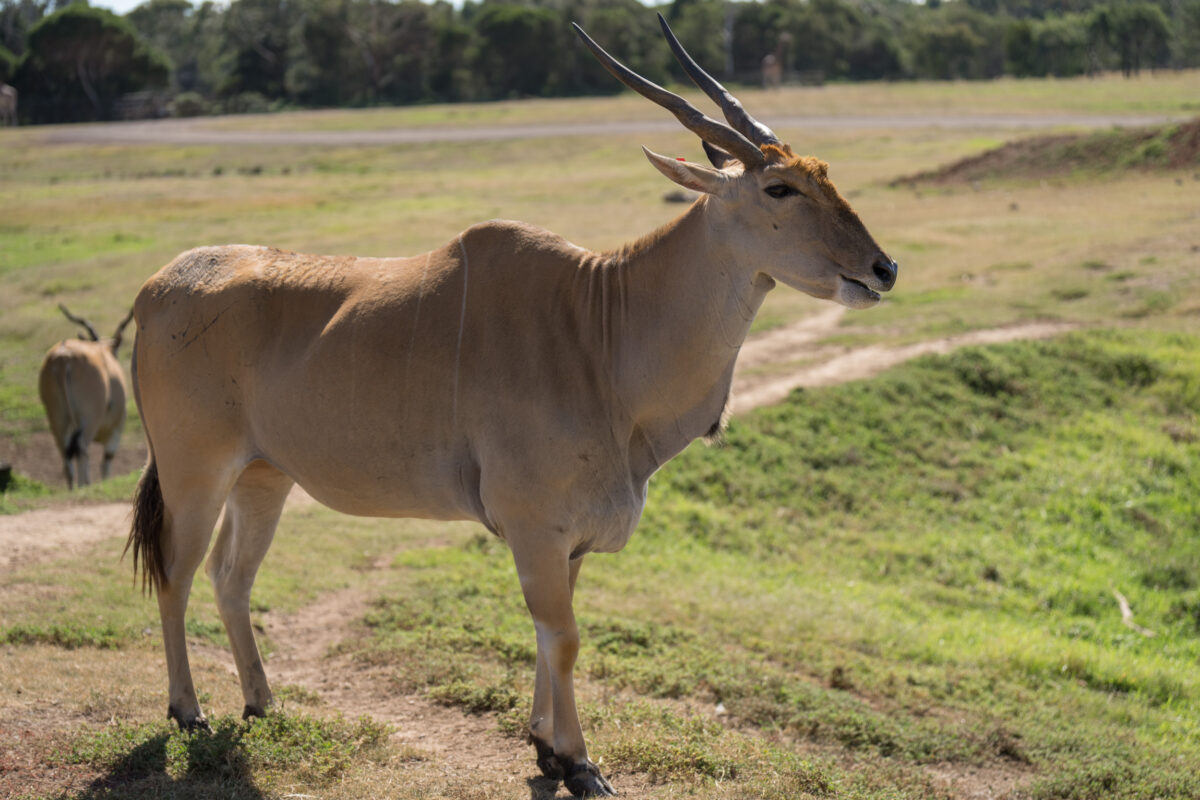