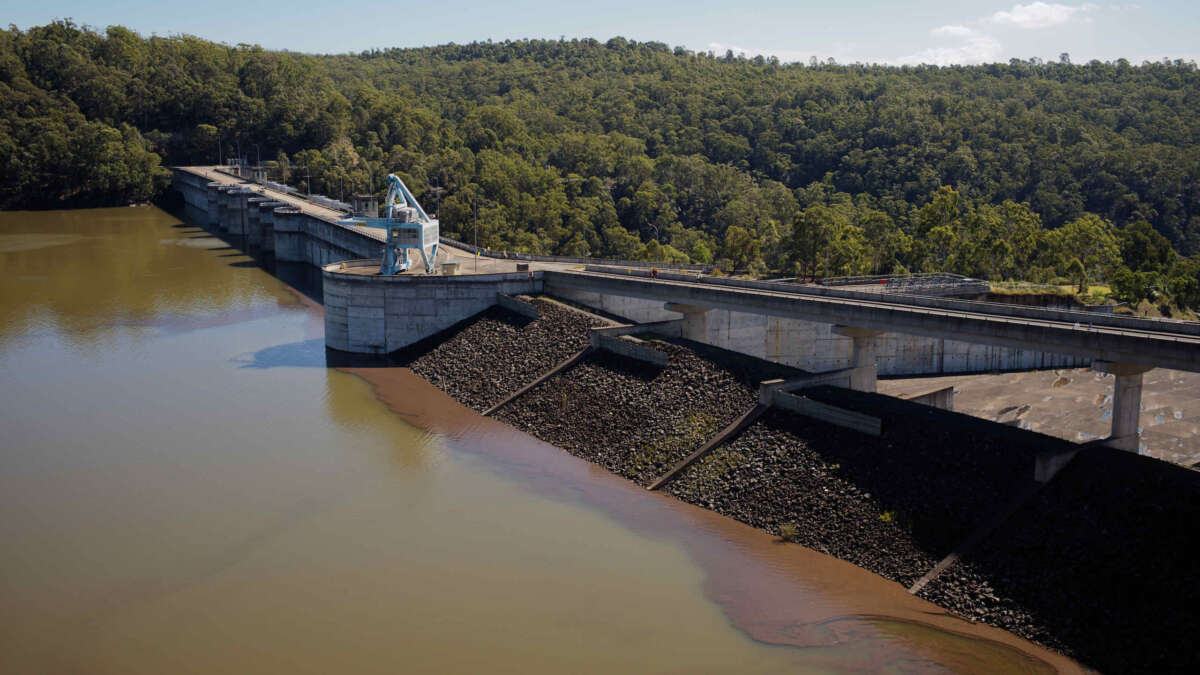 Located about 65 kilometres west of Sydney in a narrow gorge on the Warragamba River, Warragamba Dam is one of the largest domestic water supply dams in the world. It was created by damming Warragamba River and flooding the Burragorang Valley, creating a storage lake with a capacity of over 2,000 gigalitres, or four times the size of Sydney Harbour and supplies around 80 percent of Sydney’s water.

When completed in 1960, it was the world’s tallest and largest domestic water supply dam built on stone foundations, and a pinnacle in engineering achievement for this type of mass concrete dam building. Newer dams tend to be built using rock fill, allowing dam walls to reach greater heights and hold back more water.

The dam was built in a series of large interlocking concrete blocks. One of the first pre-stressed concrete towers in Australia was built to house the ice-making plant. Two suspension bridges were also built, one across Folly Creek (upstream) and another across the Warragamba Gorge (downstream). The upstream bridge was removed when the dam was complete, but the downstream bridge was kept but removed in 2001 due to damage from bushfire.

There is a small (50 megawatt) hydroelectric generator built into the dam but it is rarely used and usually disconnected from the electricity grid. In the late 1980s the dam wall was strengthened and raised by five metres. In the early 2000s an auxiliary spillway was built to divert floodwaters around the dam in a rare and extreme flood so as to protect the dam and ensure it remains safe in an extreme flood. A deep water pumping station was established in 2006 to allow water to be accessed lower down in the lake during times of drought.

On 8 February 2007 it recorded an all-time low of 32.5% of capacity. On 2 March 2012, it overflowed for the first time in fourteen years. It overflowed again in 2016 and in March 2021. When I visited in 3 April 2021, the dam was at capacity and releasing water downstream, but the auxiliary spillway was no longer in use but there were still some wet patches.

The Warragamba Dam Visitor Centre, perched on a rocky outcrop high above the dam wall, houses permanent and temporary exhibitions and offers a great view of the dam and Lake Burragorang. There are a set of gigantic valves located near the visitor’s centre.

Havilland Park, located next to the visitor’s centre contains picnic facilities and interpretive signs. Nearby is a historic “temporary” building used during the construction of the dam. On a lawn near the temporary building, I noticed a mother kangaroo and her young joey nibbling away at the grass. They were both intensely curious about my presence, but made no attempt to skip away. 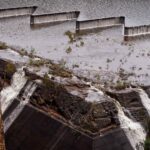